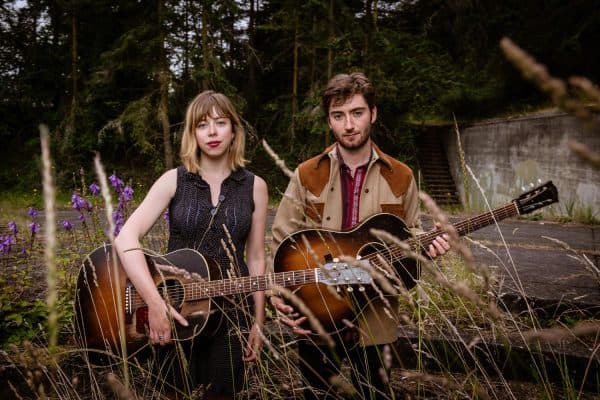 Vivian Leva’s voice is the sound of living tradition. Raised by parents who absorbed ancient tunes and ballads during visits to legendary old-time musicians, Leva grew up steeped in the Appalachian and country music of her Lexington, VA home. On 2018’s Time Is Everything, her label debut on Free Dirt Records, Leva earns a spot in the lineage of great neo-traditional songwriters like Gillian Welch and Sarah Jarosz. And much like these singers, Leva finds inspiration in the past without being stifled by it.

It is unsurprising that she found an instant musical connection upon meeting Riley Calcagno at a fiddle festival in Washington state. Calcagno, who also spent his formative years immersed in traditional music through his playing with the widely recognized band The Onlies, appears throughout Leva’s debut album, acting as co-producer and adding banjo, fiddle, guitar, mandolin and harmonies. Whether on recording or in concert, Leva and Calcagno’s vibrant and magnetic harmonies shift effortlessly between archaic ballads, classic country and honky tonk, and the best of contemporary Americana, imbuing each story of love, passing time, and heartbreak with a hearty emotional punch.

It’s rare to find such mature and confident voices in such young artists—whose music springs so organically from a grassroots connection to the traditional music community in which they were raised. Since the record’s release Leva and Calcagno have toured as a duo across Canada, the US, and the UK, and received wide critical praise. Rolling Stone Country wrote that Time is Everything “shines a light on the past without giving up its place in the present” and Wide Open Country called the record “a triumph of lyricism and musicianship.” As individuals, they have performed with Elvis Costello, Rhiannon Giddens, Donna the Buffalo, and Bruce Molsky to name just a few. To this collaboration they bring both the steady hands of experience and a refined taste for American music, yet still a youthful abandon that can’t be forced.