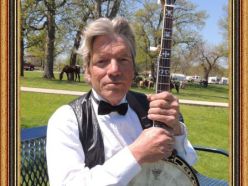 Tom Roush has been performing and arranging music for some 40 years. His diverse ability covers most genres, although his first love is 19th century American music, which he arranges in his own melodious style. He performs at various venues including stages throughout our region, Civil War reenactments, county fairs and schools where he shares his vast historical knowledge in addition to playing and singing. Tom lives in Huntington, West Virginia where he was born and raised.