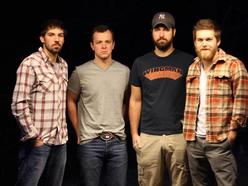 Time Sawyer is interested in “real people and real songs” and that’s just what the listener finds in their music – a sense of realness. TS blends a grassroots feel with heart-felt lyrics to put on a high energy entertaining show. Hailing from the rolling foothills of Elkin, North Carolina, the folk rock band honors its rural roots while also exploring the changes that time brings. Lead vocalist Sam Tayloe and lead guitarist Kurt Layell recorded an acoustic EP together in 2009, but the addition in 2010 of Houston Norris, on banjo, and Clay Stirewalt, on drums, allowed them to create a richer sound at their live performances and on their albums.

Time Sawyer’s first album, “Time for a Change”, placed high on WNCW’s list of Top 20 Regional Albums of 2011. Its follow up, The Maroon Album, addresses the push and pull between the past and the future, and ultimately arrives at a place of trust for the path being walked. The memorable lyrics and strong melodies result in songs that will stay in your head long after the music stops.

“Their music features great melodies, lyrics that stick in your head, and most of all a kind of ‘realness.’ If you like The Avett Brothers you probably know what I mean by ‘realness.'”
-Jody Mace: Charlotte on the Cheap