The Moon & You @ Dogtown 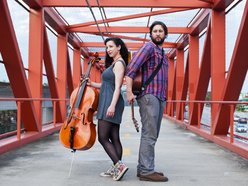 The Moon and You is a touring acoustic duo that “blends cello and guitar to craft folk music with a 1970’s singer-songwriter feel in the vein of Joan Baez or Harry Nilsson. Together they make tender songs that feel like a warm homemade blanket,” says Brian Tucker of the Wilmington Star News Online.

Rooted in the rich music scene of Asheville, NC, Ryan Furstenberg and Melissa Hyman began playing together for fun when both were part of successful bands touring the Southeast. When those bands went their separate ways, the chose to join forces rather than get a job. The result of this collaboration – between an impossibly sassy cellist from New York and a whimsical fingerstyle guitarist from Eastern North Carolina – is hard to forget, but easy to fall for.