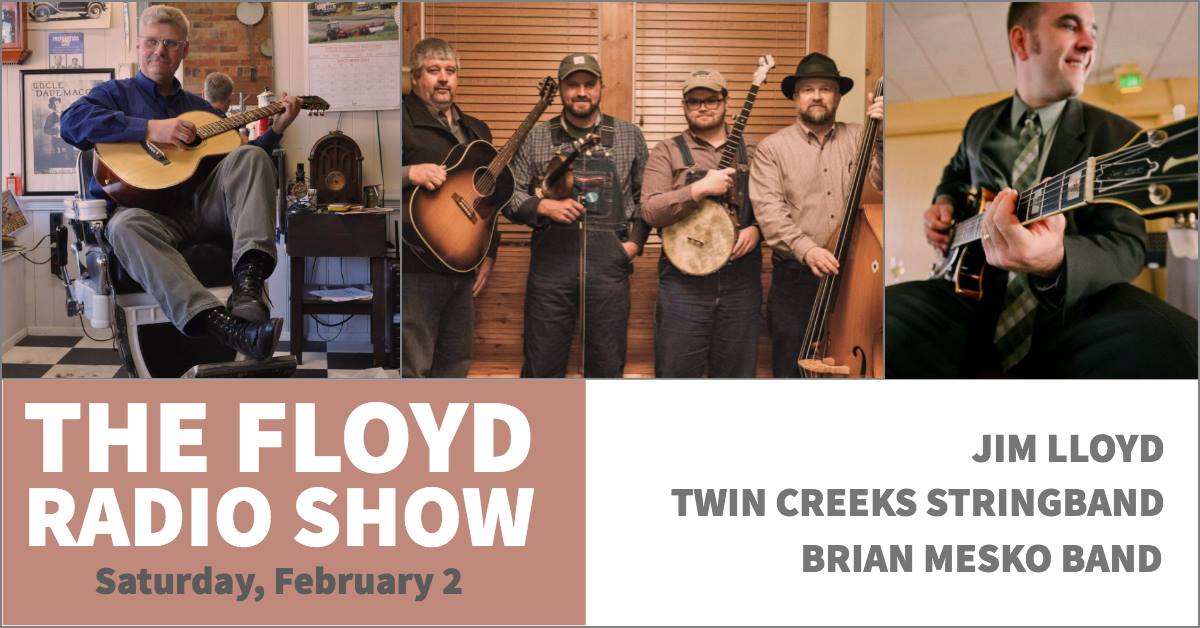 Jim is an excellent instrumentalist whose work has been documented by the Smithsonian Institute as representative of southwestern Virginia mountain music and story-telling. While accomplished on many instruments, he is known especially for his skills on guitar (finger picking style) and banjo (claw hammer and two-finger styles). Jim shares his heritage not only by performing, but as a teacher to many local students ranging from ages 6 to 70 on basically anything with strings, particularly guitar, banjo, mandolin, and fiddle.

His duo with Trevor McKenzie has been extremely well received. Jim plays in The Fruit Dodgers band led by Rural Retreat’s musical wunderkind, Elizabeth LaPrelle. He has appeared several times on the public TV series “Song of the Mountains” with Acoustic Mayhem. He has made music with the old-time supergroup Costa, Campbell, and Lloyd. In 2001, the trio released Costa & Campbell with amazing Jim Lloyd: old time music of Uncle Dave Macon, Emmett Lundy and Ed Haley. Since the start of this century he has performed with the Mountain Fling band on banjo, appearing on their 2004 album, Tunes from the Tailgate. They play parlor music often associated with the Carter Family and other early mid-20th century artists. The bluegrass world knows Jim as the guitarist backing up banjoist Carl Johnson, the best known African-American bluegrass-style picker.

In the late 1970s, a group of neighbors and friends got together to play the music that had been passed down in the Dry Hill and Ferrum areas of Franklin County. Some of the musicians were falling behind on their timing one day while playing and having some fun, and one spectator commented that he was going to call the group the Dry Hill Draggers. Banjo player Jimmy Boyd and his brother Billy Boyd started the official Dry Hill Draggers band in 1981. The group flourished, and more than thirty years later, some of the Dry Hill Draggers members formed Twin Creeks Stringband, including Jared Boyd, grandson of Jimmy Boyd, a third generation claw-hammer banjo player; his dad Stacy Boyd on upright bass; Jason Hambrick on guitar and vocals; and Chris Prillaman on fiddle. Twin Creeks Stringband has a particularly driving old-time beat that is irresistible to dancers, and they are popular performers at the Blue Ridge Folklife Festival, as well as at the Galax Old Fiddlers’ Convention.

Raised in a musical family in Little Rock, AR, Brian Mesko began piano lessons at age 8 and switched to guitar at age 10. He continued formal lessons through high school, at which time he studied Jazz Theory & Ensemble for college credit under Michael Carenbauer (who studied under Pat Metheny at Berklee) at the University of AR Little Rock. During junior high Brian learned drums and bass, and has continued developing them professionally along side the guitar.

Brian currently resides with his wife and son in Roanoke, VA as a working musician and is professor of guitar instruction at Lynchburg College.