The Floyd Radio Show at the Floyd Country Store 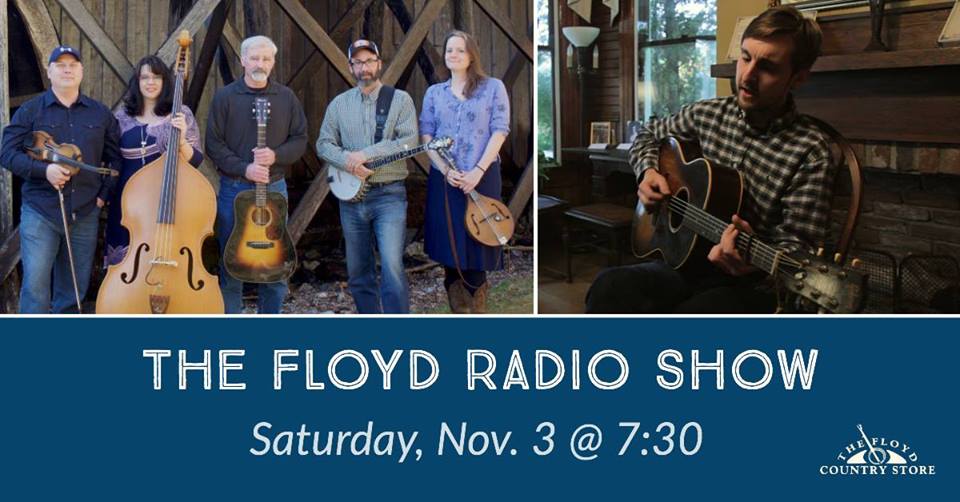 Details
Join us Saturday, November 3 for The Floyd Radio Show! This month’s guests include The New Ballards Branch Bogtrotters, Trevor McKenzie and more! Tickets are $12 in advance, $15 day of show.

The Floyd Radio Show is an old-timey variety show with original radio plays, comedy bits, ads, jingles, music and more, hosted by a series of guest hosts. Celebrating old time and traditional music with people and communities where music is played and enjoyed in its authentic and purest forms.

The Floyd Radio Show is rooted in Floyd, VA where a musical and artistic community provides endless inspiration for the show, which appears live at the Floyd Country Store on the first Saturday of each month, September through May.

In 1986 a group of musicians from the Galax, VA area formed a new band. The New Ballards Branch Bogtrotters took their name, in part from the original Bogtrotters of the 1930’s also because band leader Dennis Hall lives on Ballards Branch. Dennis’ home is very close to the home of Uncle Eck Dunford who played fiddle in the original band. The other members of the original Bogtrotters were Uncle Wade Ward, his brother, Davy Crockett Ward, and nephew Fields Ward, and Doctor Davis. They won the very first fiddlers Convention in Galax setting a precedence for all that follow in their footsteps. The New Ballard’s Branch Bogtrotters continue to play in the traditional Appalachian string-band style often playing for square dances around the region. Rounding out the Bogtrotters lineup are: Eddie Bond on Fiddle,Dennis Hall on Guitar, Josh Ellis on Clawhammer Banjo, Bonnie Bond on Bass and Caroline Noel Beverley on Mandolin. Old time music is alive and well, and continues to attract fans of all ages. The New Ballards Branch Bogtrotters remain a driving force in carrying the traditional music of the Virginia/Carolina Blue Ridge into the new millenium. It is our hope to be an inspiration for future generations of mountain musicians!

Trevor McKenzie is a multi-instrumentalist and singer originally from southwest Virginia. The progeny of cattle farmers, he first gravitated to old-time music through an early interest in regional history and a keen desire to avoid doing manual labor. Though only mildly successful in the latter ambition, he gathered a respect for the communities, historical events, and stories which continue to build the canon of traditional music. Encouraged initially by family and church music, his formal musical training began at Jim Lloyd’s Barbershop in Rural Retreat, Virginia. In recent years he has continued to learn from and be humbled by skilled musicians from along the Appalachians and around the world. Trevor currently lives in western North Carolina where he performs as a sideman with several regional acts including the Elkville String Band and the Laurel Creek String Band. On weekdays, he puts his historical knowledge and dusting skills to work in the archives of the W. L. Eury Appalachian Collection at Appalachian State University.