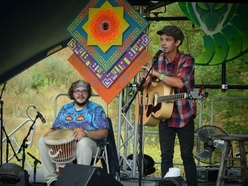 WE’RE RECORDING A LIVE ALBUM AT THIS SHOW! if you show up and cheer really loud, you’ll be on it, too!

with only two members, Seph and TK create a thick soundscape with very few components. Raised in the woods of Franklin County, Virginia, they developed a clean and powerful sound that’s difficult to describe without proper reference. Originally a done as a way to pass time and to write songs, this ended up being a full time commitment for the two.

Although the duo has played in many other projects together (Surefire Plan, Crawdawg and Company, The Papa Tom Band) they keep coming back to the simplicity of literally hand made music.

All shows have been performed with one guitar, a single djembe, and Seph’s voice.