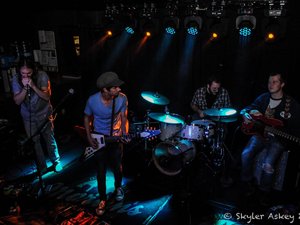 Seph Custer is a singer, instrumentalist, composer and producer from Franklin County, VA. For over a decade, Seph has played music with local groups, opening for touring acts, and performed hundreds of solo shows. Known mostly for his guitar and mandolin playing, he’s fully embraced a singing career in the past few years.

Seph & TK met in 2010, and have been playing in various bands together ever since. Formed in January 2014, their acoustic duo performs over 100 shows a year, from breweries to concert halls to country stores. They have one self released album, “Seph & TK”, and a handful of bootleg recordings in circulation.

The Papa Tom Band is a musical collective from Franklin County, VA, that plays multiple genres from a vast array of influences. Seph, TK, and Alex all teach lessons at the same studio in Rocky Mount, VA, and have played the same instruments in several bands together. In The Papa Tom Band, the explore musical territory that takes them from rock, blues, pop, hip hop, and rap, and then right back over them all with the drop of a hat.