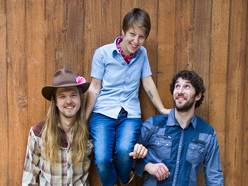 Redleg Husky is an acoustic roots trio based in Asheville, North Carolina. Since its inception in 2012, the band has been performing its unique blend of boot-stomping folk music at barrooms, theaters, and festivals throughout the Southeast and beyond. The group has released two recordings in that time, its self-titled 2013 EP, and its full-length debut, Carolina, recorded at Wild Chorus Studios in Knoxville, TN by Scott Minor and released in 2014.

Throughout its short time together, the band has been garnering rave reviews, leading to features on Alternate Root Magazine’s “5 Flying Under the Radar” and WNCW’s “Local Color,” as well as opening performances for national acts such as The Tillers and Kim Lenz and the Jaguars.

Redleg Husky features songwriting and vocals from guitarists Misa Giroux and Tim McWilliams, who also play mandolin and banjo, respectively. Since June 2015, the group’s sound has been filled out by Son Haus on bass. The trio is planning on returning to the studio in October 2015 to record its second full-length album, My Old Heart.

With several hundred shows already under their belt, Misa, Tim, and Son are looking forward to continuing to share their songs far and wide, with New England, Florida, Ohio, and everywhere in between in their touring sights for 2016.