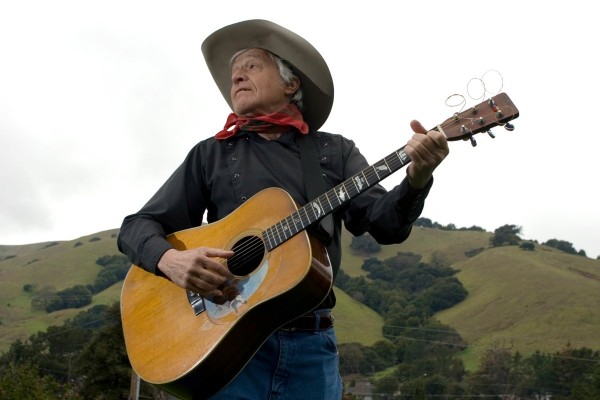 Join us Saturday, August 29 at 7:30 pm for a live show with folk music legend Ramblin’ Jack Elliott and opening guest David Simpkins. Tickets are $12 in advance, $15 day of show.

Nobody I know—and I mean nobody—has covered more ground and made more friends and sung more songs than the fellow you’re about to meet right now. He’s got a song and a friend for every mile behind him. Say hello to my good buddy, Ramblin’ Jack Elliott. ~Johnny Cash, The Johnny Cash Television Show, 1969.

One of the last true links to the great folk traditions of this country, with over 40 albums under his belt, Ramblin’ Jack Elliott is considered one of the country’s legendary foundations of folk music.

Long before every kid in America wanted to play guitar — before Elvis, Dylan, the Beatles or Led Zeppelin — Ramblin’ Jack had picked it up and was passing it along. From Johnny Cash to Tom Waits, Beck to Bonnie Raitt, Ry Cooder to Bruce Springsteen, the Grateful Dead to The Rolling Stones, they all pay homage to Ramblin’ Jack Elliott.

In the tradition of roving troubadours Jack has carried the seeds and pollens of story and song for decades from one place to another, from one generation to the next. They are timeless songs that outlast whatever current musical fashion strikes today’s fancy.

Ramblin’ Jack’s life of travels, performances and recordings is a testament to the America of lore, a giant land of struggle, hard luck and sometimes even of good fortune. Ramblin’ Jack takes us to places that spur us on to the romance and passion of life in the tunes and voices of real people.

At seventy-seven, Ramblin’ Jack is still on the road, still seeking those people, places, songs and stories that are hand-crafted, wreaking of wood and canvas, cowhide and forged metal. You’ll find him in the sleek lines of a long haul semi-truck, in the rigging of an old sailing ship, in the smell of a fine leather saddle.

Better yet, find him in your local concert hall or on one of his many albums in our Ramblinjack.com online music store.