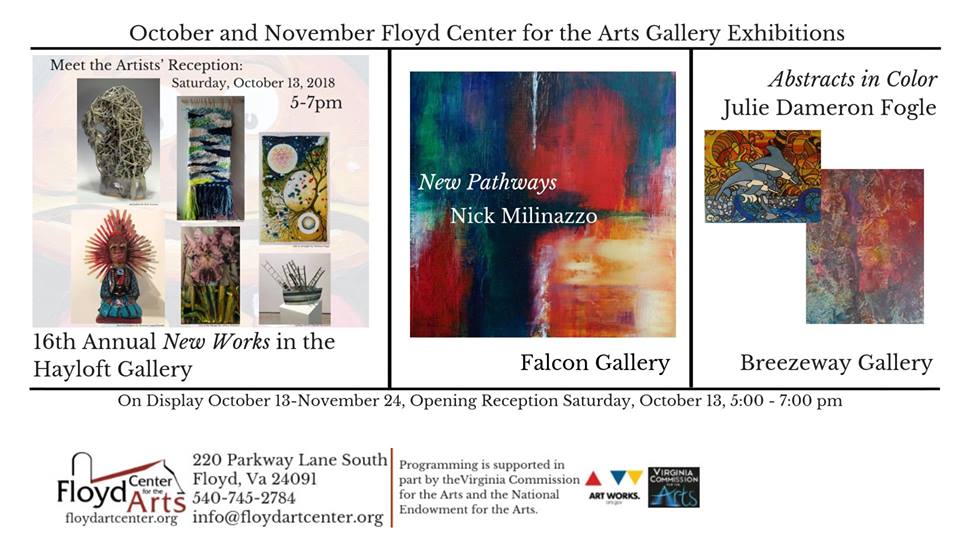 28 artists from throughout the region were selected for the New Works exhibition in the Hayloft Gallery by the Floyd Center for the Arts Gallery Committee. This yearly exhibit is a continuing reflection of the artistic growth within our community. All artwork for this show was created within the last year and has not been previously shown at the Center. The public will be invited to vote for their favorite piece and the winner of the $50 “People’s Choice” award will be announced after the end of the exhibit.

Opening the same night are exhibitions in the Falcon and Breezeway Galleries.

Nick Milinazzo’s show, “New Pathways”, featuring recent abstract oil paintings, will be on display in the Falcon Gallery. Nick grew up in California where he earned his BFA in Painting from California State University, Stanislaus in 2009. In 2012 he received his MFA in Painting from Radford University. He currently resides in Roanoke, VA where he continues to paint and exhibit his art.

Julie Dameron Fogle will exhibit her colorful acryclic and mixed media paintings in a show titled “Abstracts in Color” in the Beezeway Gallery. Julie grew up in Martinsville VA and received her BA in Studio Art from Virginia Tech in 1998. She currently resides in Roanoke VA.

Forms of media for the16th Annual New Works Show include oil paint, photography, ceramics, wood, batik, handmade paper, watercolor, fiber art and more. The following is the list of artists that are included in the New Works Exhibition: