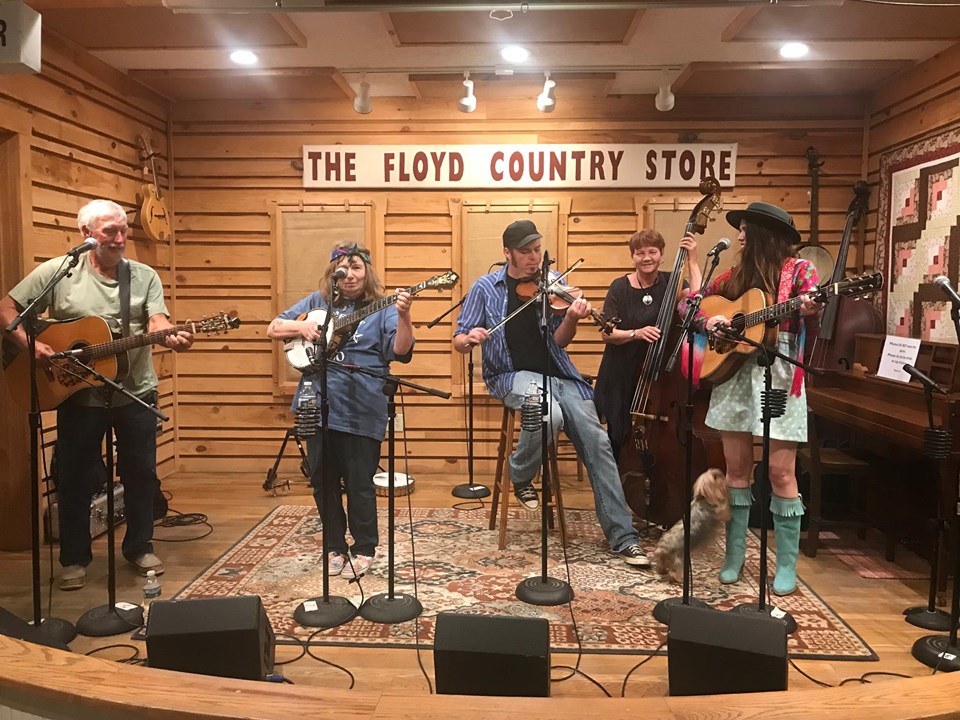 Join us at Floyd Country Store on Saturday, August 24 at 7:30pm for an Old Time Dance with The Whitetop Mountain Band. Tickets are only $8 at the door.

The Whitetop Mountain Band is a family-based band from the highest mountains of Virginia. Whitetop, Virginia is an area rich in the old time music tradition; this band has deep roots in mountain music. The members have done much to preserve the Whitetop region’s style of old time fiddling and banjo picking and are legendary musicians and teachers of the style.

The Whitetop Mountain Band is one of the most popular dance bands of the Appalachian Mountains. They have a great following at square dances all over Virginia, North Carolina, Tennessee, and Kentucky at venues like the Carter Family Fold. The band has also performed at all sorts of venues throughout the United States from festivals to concerts, competitions, and colleges. The Smithsonian Folklife Festival, National Folklife Festival, World Music Institute in NYC, Carter Family Festival, Dock Boggs Festival, World Fair, Virginia Arts Festival, Floydfest, Ola Belle Reed Festival and Merlefest are a few of the many festivals the band has performed at. They were featured on the NCTA Crooked Road Music tour of California, Nevada, Oregon, and Idaho in October 2007 and the East Coast tour of MD, VA, PA, NJ, WV and D.C. in 2010. The band members have toured overseas in the UK, Ireland, and Australia. WTMB has also taught and been master musicians/dancers for workshops and classes in fiddle, banjo, guitar, vocals, and dance all over the US. Some of these include Swannanoa Gathering in Asheville, NC, Cowan Creek Music School in KY, Mountain Music School in Big Stone Gap, and Mt. Rogers Combined School.

The band currently has recordings on the Arhoolie Record Label and Virginia Foundation of the Humanities. The band members have also been recorded by JuneAppal, Heritage and been on fiddle compilations for Rounder Records.

The Whitetop Mountain Band has been featured in many books, magazines, and tv/radio shows about Appalachian music such as The Guide to the Crooked Road, A Hotbed of Musicians, Strings of Life, In Good Keeping, Country Music Television, Travel Channel, PBS, Old Time Herald, and many tv news and radio programs.

History
The band originated with Albert Hash in the 1940s, a well-known and beloved fiddler and luthier. When he was a teenager, Albert played fiddle with Henry Whitter of “Grayson & Whitter” which recorded during the 1920’s. Albert had a tremendous impact on the old time and bluegrass scene. The tune, “Hangman’s Reel” that Albert recorded is the version played by so many old time musicians today. He also helped teach such luthiers as Wayne Henderson, Audrey Ham, and many others to build instruments.

Current Lineup
Although Thornton Spencer passed in 2017, the Whitetop Mountain Band is still carried on by Emily Spencer on banjo and vocals and their daughter Martha Spencer. Martha plays with the band as a multi-instrumentalist (guitar, banjo, fiddle, bass, vocals) and dancer. She has taken part in many Master flatfoot dancing workshops and performances also. Debbie Bramer, originally from Michigan, moved to Fancy Gap, Virginia in the early 90s. Debbie plays bass and dances in the band. Debbie has been a member of several clogging teams and been active in many dance workshops and competitions. Ersel Fletcher, from Glade Spring, VA is the newest member of the band and plays guitar and provides vocals. Ersel is a retired coal-miner from Buchanan County, VA and is steeped in the mountain music traditions.