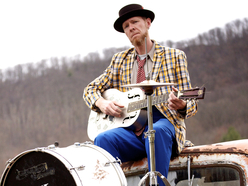 The sound of Old Man Kelly comes broadly from the early days of American roots music: when bluesmen sang from front porches on hot afternoons; when swing bands played dances in speakeasies late into the night; when being an American troubadour was a trade. Whether performing as a multi-instrumental one-man-band or appearing ensemble as Old Man Kelly and The Streetsweepers, it’s original music that still sounds familiar. A couple of guitars, a banjo or two, an arsenal of harmonicas, and a whole lot of guts.

A veteran of other recording bands (The Jugbusters, The Don’t Tell Darlings), Old Man Kelly released his first solo album, Songs, Stories, Shanties, and Shenanigans in 2013. The second album, Off My Lawn, was released in June of 2016.