The Moon & You @ Dogtown Roadhouse 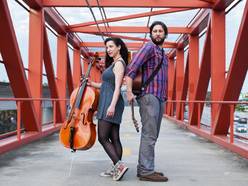 It’s hard to pin down The Moon and You. Based in Asheville, NC and touring mainly in the Eastern US and Western Europe, they are an expandable/collapseable act with ever-evolving instrumentation. It’s a band that stays busy, keeps moving, reinvents itself in small ways all the time – much like the couple at its core. Ryan Furstenberg and Melissa Hyman, who started TM&Y in early 2011, were married in September 2015 and embarked on their first European tour for their honeymoon.

As Bill DeYoung of Connect Savannah puts it: “Ryan Furstenberg and Melissa Hyman combine guitar, cello and two voices in harmony to produce a sweet and sometimes swinging take on Americana-type folk music. It’s a rich, full sound: Sometimes you’d swear there were more than two people onstage.” Furstenberg switches mainly between banjo and acoustic guitar at their shows, while Hyman plunks high-energy bass lines and saws out solos on her cello. Ukulele, percussion and electric guitar often make an appearance as well. Their love of collaboration with talented musician friends leads to an exciting variety of musical output, both at live performances and on their records.