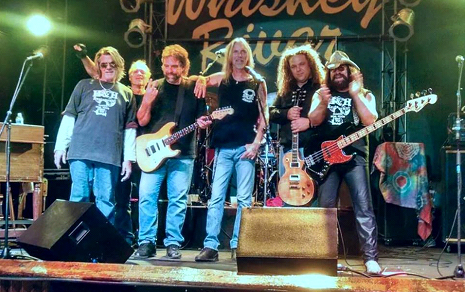 Michael Allman was born and raised in Daytona Beach, Florida. He is lead vocalist and frontman to the Michael Allman Band. Even though Michael looks and sounds very similar to his father, Gregg Allman, he has his own distinctive style of Blues and Rock.

Touring all over the country, Michael is spreading his family’s blend of roots, rock, and blues. “I’m a singer and a gypsy who needs to fly another way,” Allman said, quoting lyrics from his song It Ain’t Me.

Michael performs his original songs from his album “Hard Labor Creek” like “If Dreams Were Money” and “Mule Named Whiskey” as well as covering songs from The Allman Brothers Band.

Allman teams up with some of the finest performers in Florida – Dennis “Torpedo” Toerpe, Ronnie Ray, Rafaello (Tazz) Siacca, Kenny Hines and Mark Shane, bringing their awesome Blues Rock sounds to appreciative audiences around the country.

Tickets: $15 in advance, $20 day of show, http://dogtown-roadhouse.townvustore.com/
All Ages