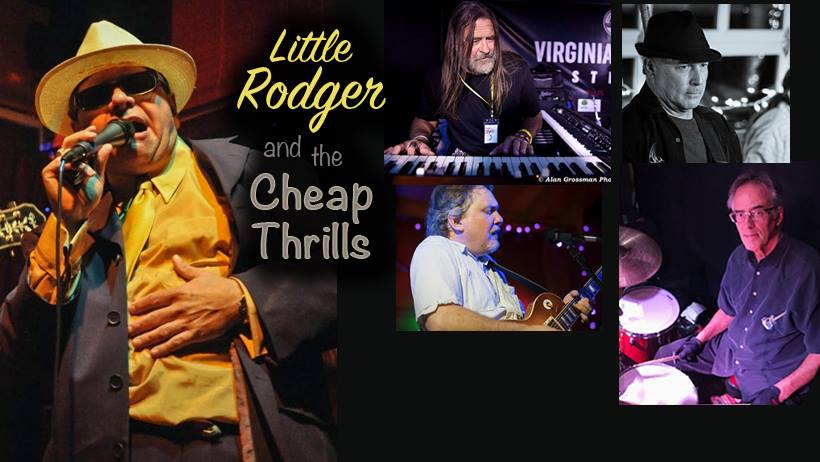 Blues and Swing to make you sing!

Little Rodger Crowder – Vocals and Harp
Little Rodger and the Cheap Thrills is fronted by veteran blues singer and harp player Little Rodger Crowder, who wows audiences with his unique and powerful approach to many blues styles including West Coast Swing, Chicago and Mississippi Delta Blues. Under Lil Rodger’s leadership the band has performed hundreds of live shows entertaining thousands of people. The band has performed in venues all over the Eastern United States and has shared the stage with many of the greatest artists in the blues genre. Little Rodger and the Cheap Thrills were finalists in the International Blues Challenge (IBC) and performed at the competition in the beautiful Orpheum Theatre in Memphis, Tennessee, finishing in the top ten of 75 national finalists. Little Rodger has recently reformed his Cheap Thrills with the following new explosive line-up:
Craig Counts – Guitar and Vocals
Little Rodger and the Cheap Thrills is proud to feature Craig Counts on guitar and vocals. Craig has been guitarist / singer for Southwest Virginia’s leading blues, soul, rock act Electric Woodshed since the 80’s. In this role he has been privileged to share the stage with such notable artists as Bo Didley, Bob Margolin, and Reverend Billy C. Wirtz. Additionally Craig has opened for blues legends John Hammond, Jimmy Thackery and Jerry Portnoy, just to name a few. A student of many styles, Craig’s blues influences include all of the Kings (B.B., Albert, Freddie and Earl), as well as Albert Collins, Eric Clapton and Stevie Ray Vaughan. Craig’s six string stylings were are also shaped by southern rock bands including the Allman Brothers, the Outlaws, Lynyrd Skynard and ZZ Top. He also enjoys playing in Crossties, a popular bluegrass / gypsy jazz group. In addition to playing soulful and funky guitar parts, Craig shares the vocals with Little Rodger and has been known to make grown women cry with his heartfelt vocal renderings.
Randy Short – Drums and Percussion
Playing drums is veteran blues percussionist Randy Short. Randy played with Virginia rock and songwriting legend Robbin Thompson in his formative years and played for over twenty five years with the Buddy Parker Band out of the Norfolk, Virginia area. With the Buddy Parker Band he opened for the likes of B. B. King, Delbert McClinton, Joe Bonamassa, The Fabulous Thunderbirds and many others. Playing with a solid rock and blues groove, Randy’s early influences were Mitch Mitchell and John Bonham. Randy loves what he does and practices for at least an hour every day. He feels like he is hitting his stride just in time to propel Little Rodger across the stage for your listening and viewing pleasure.
Dan O’Donnell – Electric Upright and Fender Bass
Providing the bottom end drive for Little Rodger and the Cheap Thrills is bassist Dan O’Donnell. Dan toured the Mid-Atlantic States with regional favorites the Fat Daddy Band for several years. He has also performed with Charlottesville based blues artist Eli Cook and has gigged with the Pennsylvania based Skyla Burrell Blues Band. In his earlier days he played with electric jug band Colorblind James Experience on the West Coast and in New York. In addition to his blues experience Dan has opened for the Red Hot Chili Peppers and played and recorded with country artist Mathew Ramsey, now of the Academy of Country Music award winning band Old Dominion. Playing bass for Little Rodger is Dan’s second favorite thing to do.
Neil (Neilo) Bartley – B3 Organ, Various Keyboard Inventions and Vocals
Known by a somewhat tongue in cheek reference from fellow musicians as “The Shenandoah Valley Blues Legend”, Neilo has decades of performing experience. An accomplished Hammond Organ, piano player and vocalist he has performed in clubs, concert halls and festivals up and down the Eastern U.S. He has been a three-time participant with three different bands and a one-time finalist in the International Blues Challenge (IBC) in Memphis, Tennessee. Neilo has also opened for many acclaimed artists including Delbert McClinton, Tommy Castro, Johnny Winter and others. Now Neilo is thrilled to be returning to Little Rodger and the Cheap Thrills.
+ Add to Google Calendar