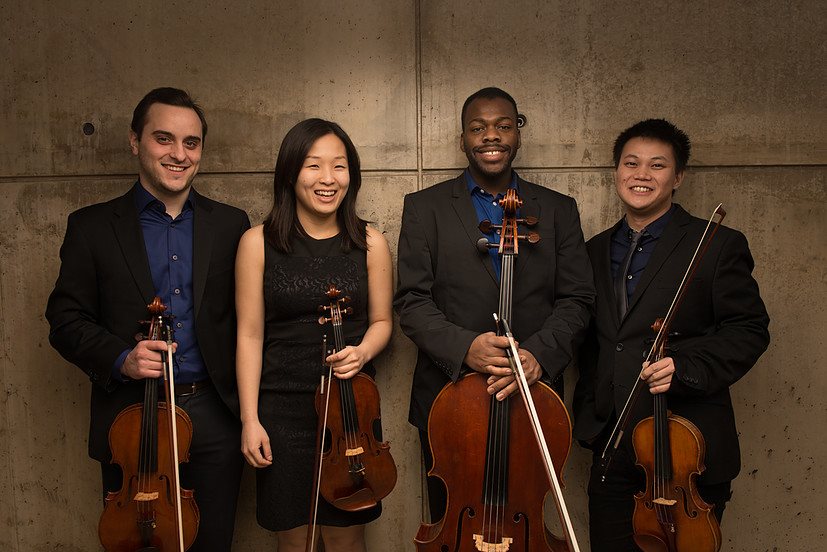 Hailed as “the captivating young string quartet” (The Bennington Banner), the Julius Quartet is rapidly making itself known in the chamber music world. Formed in the fall of 2012, the group held a special residency as “The Boston Conservatory’s Honors String Quartet”. Currently, the quartet is the Graduate String Quartet in Residence at the John J. Cali School of Music at Montclair State University, where they work intensely with the celebrated Shanghai Quartet. As passionate chamber musicians, the quartet strives to not only explore the extensive quartet repertoire but also to present their unique voice within the music. Recognized for their high level of artistry, the group was awarded 1st prize at the first annual MA-ASTA String Quartet/Quintet Competition by unanimous vote, and was nominated for the Harvard Musical Association’s Arthur Foote Award.

The Julius Quartet gave its Carnegie Hall debut in March 2016, and has performed recitals in various venues such as Bargemusic (Brooklyn, NYC), Rockport Music (Rockport, MA), The Moss Arts Center (Blacksburg, VA) the Museum of Fine Arts (Boston, MA), and the Isabella Stewart Gardner Museum (Boston, MA). In addition, the group has been featured repeatedly in the Music from Salem festival, where they have collaborated with artists and directors Rhonda Rider, Lila Brown and Judith Gordon. While in Boston, the Julius Quartet participated in numerous festivals at the Conservatory, including the prestigious String Masters Series and the Contemporary Music Festival, collaborating with artists such as Joseph Silverstein, Louis Andriessen, Michael Norsworthy and Andrew Mark. Keeping an active performance schedule during the summer, the quartet has participated in numerous summer festivals such as the McGill International String Quartet Academy, the Chamber Music Residency at The BANFF Centre, the Chamber Music Intensive Seminar at Virginia Tech University, the Worcester Chamber Music Society Summer Festival and The Apple Hill Center for Chamber Music.
As strong advocates for outreach events and educational workshops, the Julius Quartet is actively searching to engage various communities in diverse ways. Through the Massachusetts American String Teachers Association, the group conducted performance workshops and lectures in elementary, middle and high schools throughout the New England region. Furthermore, they worked with “Bridging the Gap” organization in Worcester, MA- a program for youth at risk associated with The Salvation Army. While there, the group interacted with kids of various ages, teaching them to use musical improvisation as a way to discover their individual voice. The quartet has given masterclasses for numerous youth music programs, such as the Empire State Youth Symphony String Festival, the Newark School of the Arts, the Florida Youth Symphony Orchestra and the Harrison Arts Center. Moreover, they have also been featured as guest artists at some of the country’s most prestigious institutions, including the University of South Florida and an upcoming residency at Virginia Tech University.

Floyd Center for the Arts