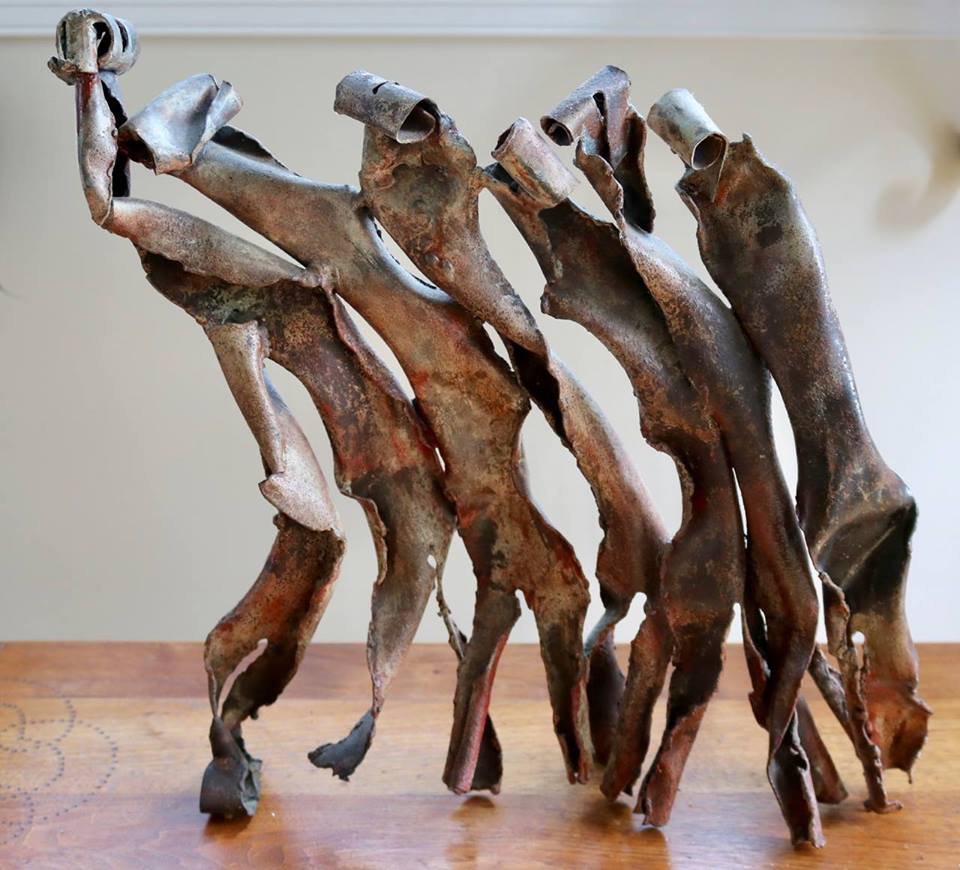 The Floyd Center for the Arts
220 Parkway Ln S, Floyd, Virginia 24091
The Frieda Howard retrospective exhibition includes sculptures, assemblages and wearable artworks made from a variety of media, including welded steel and manipulated found objects. Ranging from abstracted to complete non-representational imagery, the works symbolize the enduring pain and emotional anguish from a childhood and early adulthood in Nazi Germany. Frieda Howard’s powerful artwork is an overall testament to her resilience and serves to archive her amazing, but complex journey from Europe to the United States.

Frieda Howard’s nephew Alan Graf helped facilitate the manifestation of this exhibit of Frieda’s art work. Alan is a musician, lawyer, and journalist who lives in Floyd, Virginia. In addition to his family connection to his aunt and Nazi Germany, Alan’s wife’s family goes back to the mid 1700s in Patrick County, Virginia and includes one of the original founders of Stuart, Virginia, formerly Taylorsville.

Frieda Graf was born in the town of Offenbach in Germany on November 6, 1919. There were 7 children in the family, she was the only girl. Her family was Orthodox Jewish, as were all the Jewish families in her town. Her father was a distant man, cruel to his sons and indifferent to his daughter. He was a gambler who kept the family in genteel poverty. Her mother was a sad, overwhelmed woman who doted on her only daughter. When Frieda was in her early teens her mother went to the Rabbi and got from him the funds to send Frieda to a finishing school in Switzerland for a few months. Frieda was a beautiful, strong, wild, demanding, charismatic child- who would carry all these characteristics into adulthood. She loved to dance and intended to become a professional dancer. Somehow her mother managed to keep her in dancing lessons. On a more practical level, she was apprenticed to a seamstress with the goal of earning a living by sewing.

Hitler’s rise put an end to all of those dreams and goals. Because she was Jewish, Frieda was first forced out of school, then her dance studio, then her apprenticeship. Her parents sent all of her brothers out of Germany before her and her baby brother, Joe. Frieda was sent to the United States in 1938 using a Polish passport obtained for her by her father. By the time she left no Jew could get a German passport. She was able to get the Polish passport because her father had been born in an area that was, at that time, Polish. She was the last of her family to escape. Her parents and her brother Joe were captured by the Nazis and sent to concentration camps- her parents were both murdered in the gas chamber but her brother Joe survived. He and another one of her brothers came to the United States. Of the other four brothers, one was killed during the war after he joined the French Foreign Legion; two went to South America, and one went to Palestine. Of those four, Frieda only ever saw her brother Jacob again. In the 1980s Frieda and her husband were able to visit him in South America.

When Frieda arrived in the United States she lived with an aunt and cousins, and her brother Bernard, in Coney Island, Brooklyn. She learned to speak English by going to the movies. She worked as a seamstress, sewing in front of a window. Leo Howard, a lawyer and a soldier, saw her in the window and was struck by her beauty. Although she had sworn to herself that she would never be a part of another family after her first family had been destroyed, Leo wore her down and September 15, 1942 they were married. They subsequently had two daughters. The elder, Linda, was killed in an automobile accident in 1965.

Frieda’s life was defined by two competing forces: the guilt, despair and rage caused by the destruction of her world and family; and the joy, discipline and intensity of her amazing creativity on the other. The expression of Frieda’s creativity filled every aspect of her life. She took dance lessons for many years after she came to America. She was an early devote of modern ballet, going to all of Martha Graham’s and Paul Taylor’s appearances in New York. For three decades, starting in her fifties, she devoted herself to the discipline of Tai Chi. In her sixties she began working as an artist, and she continued that work until her death. Her favored medium was metal sculpture. She helped to create an artists’ group in the lower east side of Manhattan and exhibited her art on a regular basis throughout New York City. She was an amazing cook, using fresh ingredients and cooking everything from scratch before that became the fashion. Throughout her life, Frieda sewed beautiful clothes for herself and her children. She would take basic garments sold in stores and turn them into works of art. She loved the opera. She visited art museums regularly. Frieda’s love for, and knowledge about, the artists and their works made going to a museum with her an exhilarating experience. Both her surviving daughter and her granddaughter have Frieda to thank for their appreciation for dance, art and opera.

Frieda Howard died on February 18, 2013. Those who loved her are proud and happy that she left behind so many works of art that manifest the tenacity, pain and passion with which she lived her life.