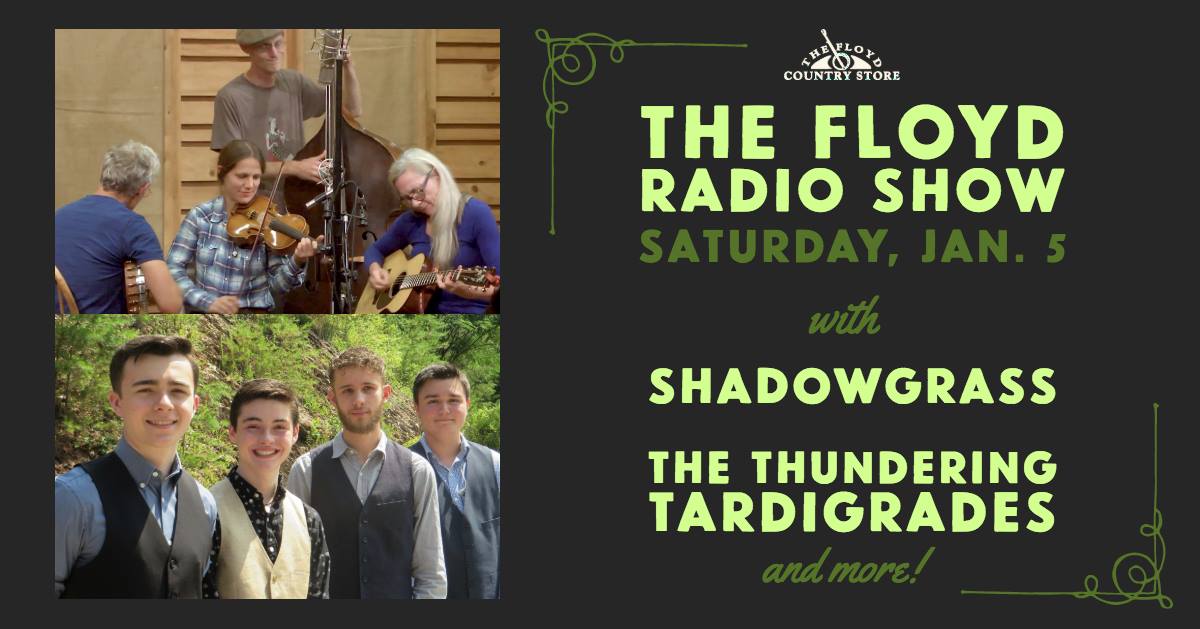 Join us for The Floyd Radio Show on Saturday, January 5, 2019 at 7:30 pm: a night of music, stories, skits and jokes; live at the Floyd Country Store and broadcast online during the event.

Guests for this month’s Floyd Radio Show include the young bluegrass sensation ShadowGrass, old time stringband The Thundering Tardigrades, and Hoppie Vaughan with Bob Casey! Tickets are $12 in advance, $15 day of show.

The Floyd Radio Show is an old-timey variety show with original radio plays, comedy bits, ads, jingles, music and more, hosted by a series of guest hosts. Celebrating old time and traditional music with people and communities where music is played and enjoyed in its authentic and purest forms.

The Floyd Radio Show is rooted in Floyd, VA where a musical and artistic community provides endless inspiration for the show, which appears live at the Floyd Country Store on the first Saturday of each month, September through May.

ShadowGrass is a group of young musicians from Western North Carolina and Southwestern Virginia who crossed paths at local fiddler’s conventions in the summer of 2014. They began a musical journey that has led them to play and compete together.

Although they have their own style, ShadowGrass is honored to be playing in the shadow of great bluegrass legends. Holding to their bluegrass roots, fast picking, and fresh arrangements have earned the band numerous awards in youth and adult competitions across the region. In 2016 they placed 5th in the adult bluegrass band category at the Galax Fiddler’s Convention. ShadowGrass has had the privilege of playing at exciting venues, including Heartwood and The Crooked Road,The Blue Ridge Music Center, The Lincoln Theatre, The Historic Earle Theatre, and at festivals such as the National Folk Festival, MerleFest, HoustonFest, the Richmond Folk Festival, SPGBMA, and IBMA. They were honored to be chosen as a featured youth band for the IBMA World of Bluegrass Festival in 2016 and 2018.

Their foot-tapping music and charming personalities continue to draw a crowd and gain encouraging fans with each new place they visit. ShadowGrass is looking forward to contributing to the heritage of bluegrass music for years to come.

A native of Union, SC, Hoppie or “Hop” as he is fondly regarded became serious about his music career at the ripe old age of 12, when he heard his then 17-year-old brother playing drums in a garage band. Soon, he had a bass guitar in his hands and was practicing constantly. By age 14, he was playing brass 1970s music in his first band, The Horseheads, a USC, Aiken pep band that also played the club circuit, aka the “Chittlin’ Circuit”, all over the Southeast. He was writing original songs by 16. Hollowpoint came next, a regionally popular SC and GA band, which recorded in James Brown’s Third World Studio in North Augusta, SC and E. Avalon Studio in Muscle Shoals, AL, circa 1977.