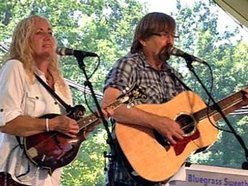 David and Valerie Mayfield started playing music together in the late 1980s when they formed a country band named “One Way Rider.” They quickly became one of Northeast Ohio’s favorite country bands and played at the famous Hurdy Gurdy in Poland, Ohio, and at Ponderosa Park in Salem, Ohio. At Ponderosa Park they opened up for Marty Stuart, Vince Gill, and Patty Loveless and many more. David and Valerie also played as a duet at the Red Garter Saloon at Ponderosa Park, and followed every main country act on Sunday afternoons.

The family bought an old tour bus that turned out to be Bill Monroe’s famous Bluegrass Breakdown. They moved to Nashville and became the house band at The Nashville Palace. They played shows at the Ernest Tubbs Records Shop, The Ryman Auditorium, Tootsies, Gibson Guitar Cafe, the new Gibson Bluegrass Showcase and The Station Inn. During this time they played shows with Sam Bush, David Grisman, Vassar Clements, Larry Cordle, Peter Rowan, Tony Rice, Del McCoury, Ralph Stanley, and many others. During this time frame David produced their third family CD, “One Way Rider Guesses River.” This CD featured Stuart Duncan on fiddle and Alan O’Bryant on banjo. The next CD, again produced by David Ray Mayfield, was a gospel CD “One Way Rider – The Man in the Middle.” This featured some family four part acapella songs and also included Amanda Lynn Mayfield on banjo. The last family CD, entitled ”OWR The Mayfield Family,” was again produced by David Mayfield.

David and Valerie’s children have since gone on to become national and international performers. They both have appeared on the David Letterman show. David and Valerie now live in the New River Valley and are touring now as a dynamic bluegrass duet, having performed over 150 shows in 2015, and have recently finished their second duet CD.