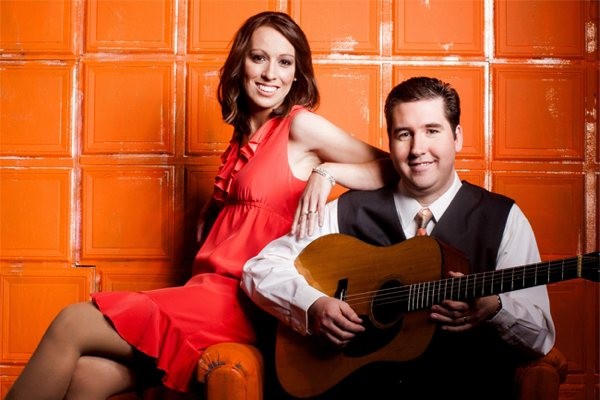 Join us at the FCS – Saturday, September 12 at 7:30 pm for a live show with bluegrass duo Darin and Brooke Aldridge. Tickets are $12 in advance, $15 day of show.

About Darin and Brooke Aldridge

Mountain Home Music Company recording artists, Darin and Brooke Aldridge have received multiple nominations from the International Bluegrass Music Association (IBMA), the Society for the Preservation of Bluegrass Music of America (SPGBMA) and Inspirational Country Music (ICM). In the 2014 IBMA Awards, they received their second career nomination in the Gospel Recorded Project of the Year category.

The Aldridge’s are mainstays on radio charts with songs lingering in top positions well after release. The music video “Wildflower” is featured on CMT, CMT Edge and GAC. The numerous TV appearances include PBS, Great American Gospel, The Bluegrass Road, Presley’s Country Jubilee, RFD-TV, Rural-TV, Daystar Network, Blue Highways TV, Song of the Mountains and Music City Roots. Their artistic quality and many accolades led to the band being signed in 2014 by Buddy Lee Attractions for exclusive booking.

Both highly acclaimed vocalists in their own right, Darin and Brooke combine rich harmonies with impeccable musicianship to create the unmistakable sound that has made them one of the hottest young acts in acoustic music. Darin was a member of the acclaimed Country Gentleman for six years and is a highly sought-after multi- instrumentalist. Brooke has been lauded for having one of the most distinctive voices in any genre of music. Together, they’ve surrounded themselves with a band of equally amazing pickers who support and enhance the Aldridge style, which includes both tradition and innovation. Songs that are thoughtfully chosen by the married couple for whom love and faith always come first. There is a sweetness and a lightheartedness in their music with positive lyrics and the occasional sense of just plain fun.