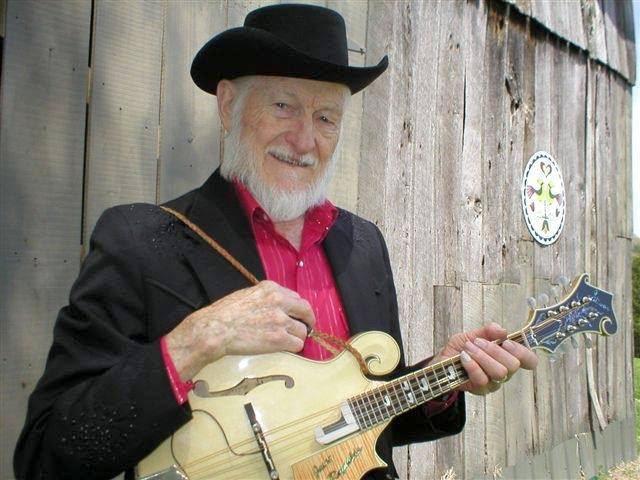 As part of Crooked Road’s Mountains of Music Homecoming,

Today in the 68th year of his legendary career, Jesse McReynolds is renowned for being part of the successful bluegrass duo Jim and Jesse and also for his influential mandolin style. Born and raised near Coeburn, Virginia, in the small community of Carfax, Jesse and his older brother Jim grew up surrounded by traditional music (their grandfather Charlie McReynolds, for instance, was part of the Bull Mountain Moonshiners string band that recorded at Victor Records’ legendary recording sessions in Bristol, Tennessee/Virginia in 1927). From the duo’s beginnings in 1947 through the death of Jim McReynolds, Jim and Jesse recorded for such record companies as Capitol, Columbia, Epic, Rounder, and their own Old Dominion label, and the brothers had several hits on the country chart. In addition to appearing on live radio and television shows, Jim & Jesse joined the Grand Ole Opry on March 2, 1964. Their harmony was exceptional, with Jim’s high tenor augmenting Jesse’s deeper lead vocals. Additionally, Jim played guitar while Jesse played mandolin. Early in their career, Jesse developed a “McReynolds style” technique on the mandolin, combining cross-picking and split-string playing to permit fast execution of intricate melodic patterns. Throughout their career the brothers were backed by the Virginia Boys, comprised of various top-notch musicians. Jim died in 2002, and Jesse has carried on the Jim & Jesse tradition, playing throughout the world with a new version of the Virginia Boys. Jesse’s grandson Garrett McReynolds took Jim’s place in the band on guitar and tenor vocals. Other musicians include banjoist Gary Reece, guitarist Larry Carney, bassist Joseph Smith, and fiddler Steve Thomas. Jesse McReynolds & the Virginia Boys will perform at the Floyd Country Store on Thursday, June 16. For more information, call 276 492-2409.