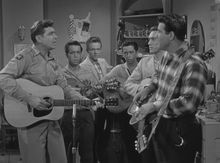 The Country Boys are a five member bluegrass band seen playing around Mayberry, especially in Floyd’s Barbershop. The Country Boys are a real-life band who appear in two episodes of The Andy Griffith Show, and would later become known as The Kentucky Colonels. They are comprised of Billy Ray Latham on banjo, Leroy Mack and Clarence White on guitar, Eric White on bass and Roland White on mandolin.