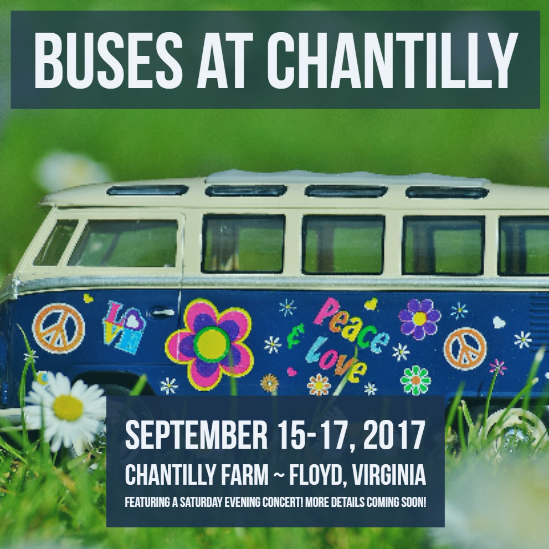 Join us for the second annual Buses at Chantilly! A Volkswagen bus rally and campout in the beautiful Blue Ridge Mountains of Floyd, Virginia!

COSMIC CHARLIE: A Tribute to The Grateful Dead

Open to the public, tickets on sale soon.

No coolers or pets, ABC available for 21+

Cosmic Charlie was born in the musical Mecca of Athens, Georgia. From its summer 1999 inception, the band has been swiftly cementing its reputation as a band that puts a unique and personal twist on the Grateful Dead catalogue, a Dead cover band for folks that are ambivalent about Dead cover bands. Rather than mimicking the Dead exactly, Cosmic Charlie chooses to tap into the Dead’s energy and style as a foundation on which to build. The result is healthy balance of creativity and tradition, and both the band and its audience are taken to that familiar edge with the sense that, music is actually being MADE here tonight.

Talk to anyone who has seen the band. “Grateful Dead like none other”. Moving and shaking even the most skeptical of Deadheads, Cosmic Charlie storms into a town and plays with an energy that eludes other bands, an energy that often eluded the Dead themselves. Those precious moments during Dead jams when the synchronicity is there and all is right with the world, these are moments that Cosmic Charlie relishes and feverishly welcomes with open arms. Clearly, Cosmic Charlie’s audiences are also eager to arrive at those moments, and together with the band, they have indulged in many memorable evenings.

Cosmic Charlie has performed over 300 shows at theatres, clubs and festivals across the contiental USA. From Oregon to Colorado to Ohio to the Carolinas, Cosmic Charlie’s unique take on the Dead has garnered the attention of luminaries from the Grateful Dead extended family. Some who have joined Cosmic Charlie on stage include:

“One More Saturday Night”
Members of Cosmic Charlie are a versatile bunch, having collaborated with the likes of Widespread Panic, Robert Fripp, Indigo Girls, Ween, Michael Stipe, Jimmy Herring, River Phoenix, Juliana Hatfield and Vic Chesnutt, to name a few. Originating as a “one-night-only” Jerry Garcia birthday tribute (performing under the moniker ‘One More Saturday Night’), word spread quickly that this was no ordinary musical confluence.

Admission to the concert is free for VW Bus Campout participants. Tickets for the general public go on sale in early-summer!