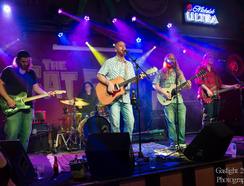 One seemingly ordinary day in late 2008, Ben Sutton got a phone call from a good friend of his that would send his life on an unexpected path. He had just begun his personal journey into songwriting. Like many new songwriters, he had no real plans for his music and had not shared his work with anyone other than a few close friends. It was one of these close friends that called him to ask if he would play a show with him at a coffee shop around the corner from where Ben lived at the time. Ben agreed without thinking twice. This is where the making of his debut album Comin’ Up High truly began.