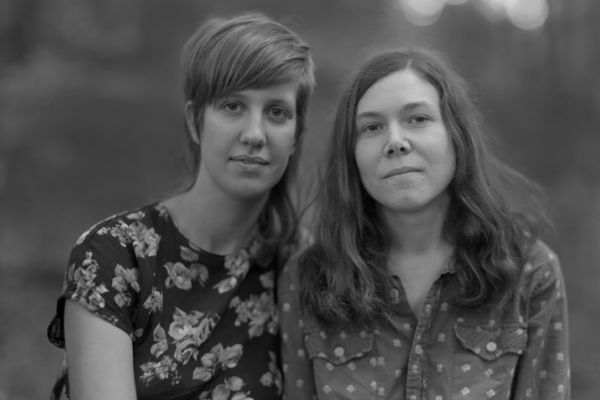 A collaboration between Anna Roberts-Gevalt and Elizabeth Laprelle, the pair’s growing acclaim springs from a shared quartet of talents: Both are historians, storytellers, visual artists, and gifted, intuitive musicians—in combination, a groundbreaking approach.

Inspired by the richness and tradition of the music, Anna & Elizabeth gather songs and stories from archives and visits with elders. They bring these songs to life in performance with sparse, atmospheric arrangements using guitar, banjo, fiddle, and the uncanny blend of their voices in close harmony. They accompany their songs with stories—of the lyrics, of the singer, of the quest to learn the song—and they illustrate them in mesmerizing fashion. The two revive the old scrolling picture show, dubbed “crankies”—intricate picture-scrolls illustrating the old songs they sing, which they create in tandem with papercuts, shadow puppets, prints, and embroidered fabric.

Anna & Elizabeth met in 2011, and their work has brought them to stages across the world, including the Atlanta Museum of Modern Art; folk festivals in Brooklyn, the Yukon, Chicago, Maine, and Uzbekistan; residencies at universities; summer traditional music schools; and small theaters and folk clubs across the U.S. and U.K.

Their second album, which features Grammy nominee and legendary folk singer Alice Gerrard, was released March 2015 on Free Dirt Records. It has been featured on Vice’s Noisey, the Huffington Post, No Depression, and NPR Music’s Tiny Desk Concert series.