An Afternoon at the Opera with Thomas Lewis O’Neill 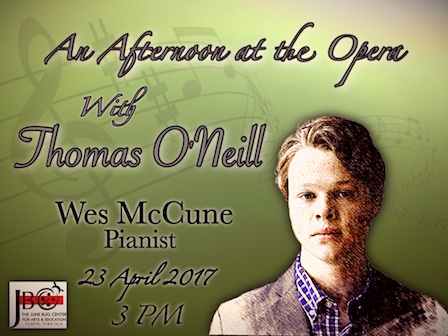 An Afternoon at the Opera with Thomas Lewis O’Neill

The first place winner at the 2015 and 2016 state National Association of Teachers of Singing (NATS) competition, the 2015 NATS Atlantic Regional Competition and qualified as a Semi-Finalist for the National Round in July 2015. He has participated in vocal training programs at The University of North Carolina School of the Arts, Torggler Summer Vocal Institute, the Altanta Opera, and Brevard Music Center.

This Spring, In addition to several solo recitals and competitions,Thomas will appear as a guest soloist performing Jake Heggie’s Friendly Persuasions with the Paramount Chamber Players for a series of concerts.

This summer, Thomas will be attending the Franco-American Vocal Academy program in Salzburg, Austria were he will play the roles of Monostatos in ” Die Zauberflöte” and Bastien in “Bastien und Bastienne.” Thomas studies classical voice with Rachel Milligan Helton and John Fowler.