The Price Sisters at The Floyd Country Store 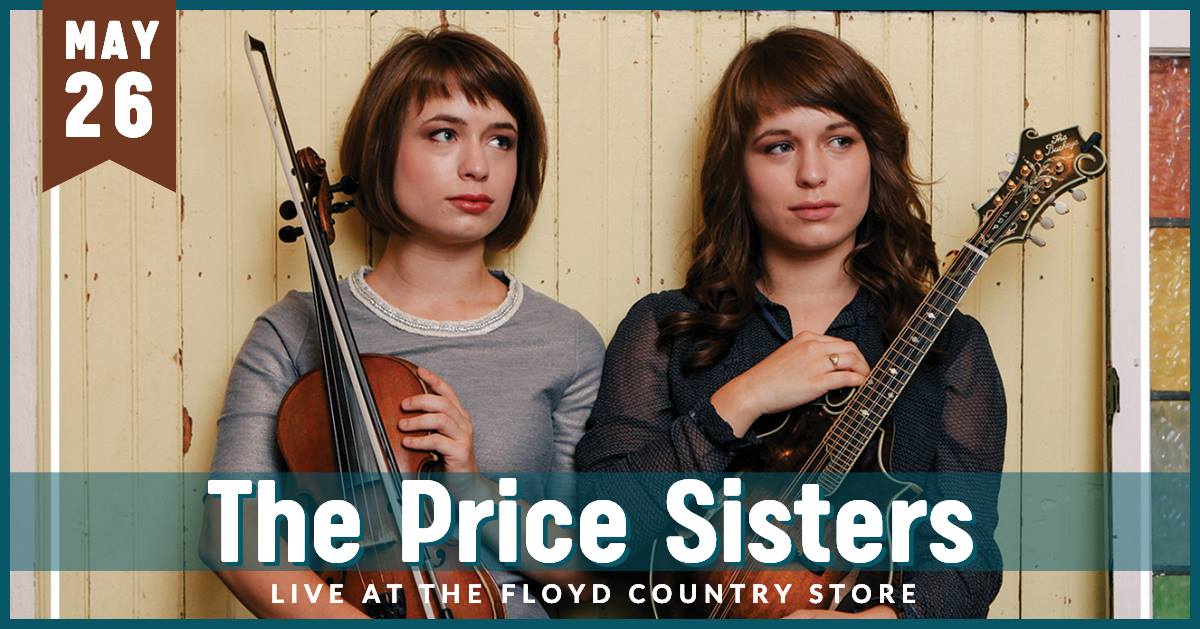 Virginia-based Rebel Record’s most recent recording artists, The Price Sisters, feature Lauren Price, mandolin, harmony/lead vocals, and Leanna Price, fiddle, lead/harmony vocals. Lauren and Leanna are twenty-two year old twin sisters from Sardis, Ohio, who love and perform the traditional style of bluegrass music. They have been greatly influenced and inspired by the sounds of Bill Monroe and his Blue Grass Boys, Hazel and Alice, and the Carter Family, and strive to carry forth those traditional sounds established so long ago. Lauren and Leanna released their Rebel debut in August 2016, a 7-song EP recorded and produced by Bil VornDick in Nashville, TN. The girls were accompanied on the recording by Charlie Cushman, Mike Bub, Ronnie McCoury, Dustin Benson, and Alan Bartrum. Since being released, the EP has been well received nationally and internationally, and has had much success on the Billboard and Roots Music charts.

Presently, accompanied by a full band, The Price Sisters’ sound is original and fresh, while also capturing the essence of the traditional style of bluegrass music laid down by Bill Monroe and his disciples. Musicians Scott Napier (guitar), Ruth McLain Smith (bass), and Daxson Lewis (banjo) accompany Lauren and Leanna. Scott started his now 20+ year career in bluegrass touring with Larry Sparks, and has remained active and involved in the promotion and preservation of the music ever since, to his achievement and regard. As one member of the McLain Family Band, Ruth has been a life-long member and advocate of the bluegrass community, playing on stages and in concert halls all over the world, garnering great success and acclaim. In a short time, Daxson Lewis has earned much respect on the banjo in the eyes of his peers and mentors, and has graced the Opry stage as well.

The Price Sisters have performed at festivals from Michigan to Georgia, and Colorado to Maine. A few of their appearances have included Bill Monroe’s Bean Blossom Festival, RFDTV’s Cumberland Highlanders Show, Blistered Fingers, and the High Mountain Hay Fever Festival in Westcliffe, Colorado. They have been guest performers on the Cumberland Mountain Music Show, and have participated in live performances for PBS’s Song of the Mountains, WoodSongs Old-Time Radio Hour, WKYT-TV, Lexington, Kentucky, and the legendary Wheeling Jamboree, in Wheeling, West Virginia. They have opened for numerous bands including IBMA female vocalists of the year, Dale Ann Bradley, and the Kenny and Amanda Smith Band, and have also been on-stage guest performers with various bands including, The Lost and Found, The Spinney Brothers, Bobby Osborne and Rocky Top Express, and David Davis and the Warrior River Boys. Currently based in Eastern KY, the band continues to make numerous appearances at various venues in the region. In 2015 they were two of six student band members who toured the Peoples Republic of China with the Morehead State University Mountain Music Ambassadors. The sisters have also taught various workshops including Bluegrass Bootcamp at Bean Blossom. In both September 2016 and 2017, Lauren was included among the instructors at Mike Compton’s Monroe Mandolin Camp in Nashville, Tennessee. In addition, Lauren and Leanna are 2017 graduates of Morehead State University in Morehead, Kentucky May 2017, both having earned Bachelor of the Arts degrees in Traditional Music.

In June and July of 2017, Lauren and Leanna recorded what will be their first full-length album for Rebel Records. Bil VornDick again engineered and produced the project, while the girls were joined in-studio by musicians Mike Bub, Charlie Cushman, Bryan Sutton, Justin Moses, Alan Bartram, and Ruth McLain. The project is set to be released in early 2018.