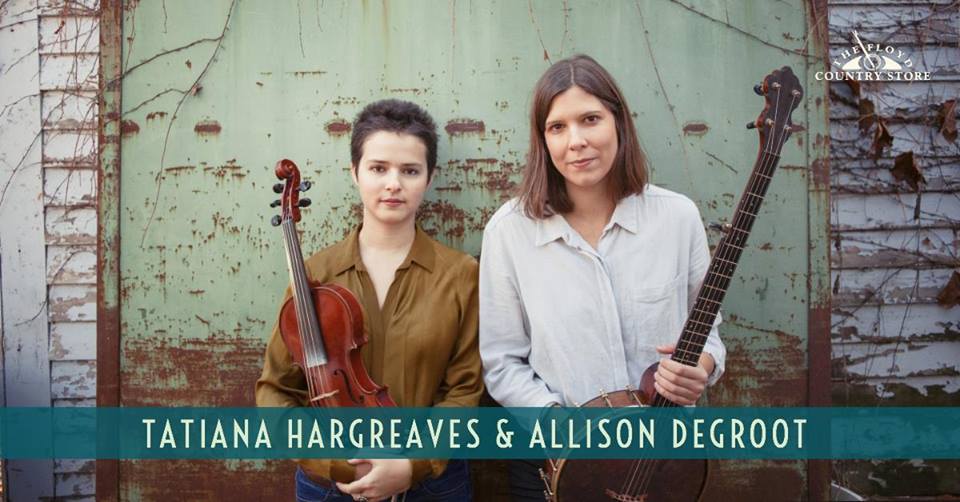 Allison de Groot and Tatiana Hargreaves join forces for a new duo project. With banjo, fiddle, and voice, Allison and Tatiana seek out unusual repertoire that catches their ear and inspires them to explore the boundaries of the tunes. Their debut album showcases a strong new voice that is both reflective and dynamic. The album will be released in 2019. Don’t miss this special Floyd Country Store show featuring music from their upcoming release!

Allison de Groot: Allison de Groot combines love for old-time music, technical skill and a creative approach to the banjo forming her own sound – unique and full of personality. Although firmly rooted in old-time and music, she loves to collaborate and create outside this genre, pushing the boundaries of the clawhammer banjo. She is currently performing with Bruce Molsky’s new project Molsky’s Mountain Drifters and The Goodbye Girls.

Tatiana Hargreaves: Over the past eight years, Tatiana Hargreaves has been on the forefront of an up and coming generation of old time, bluegrass and new acoustic musicians. Since releasing her first solo album “Started Out To Ramble” in 2009, Tatiana has toured with musicians such as Dave Rawlings, Gillian Welch, Laurie Lewis, Darol Anger, and Bruce Molsky. From being the second woman to place first at the Clifftop Appalachian Fiddle Contest, to her bluegrass fiddling on Laurie Lewis’ GRAMMY-nominated album The Hazel And Alice Sessions, Hargreaves shows a musical fluency that flows between old time and bluegrass worlds with ease.