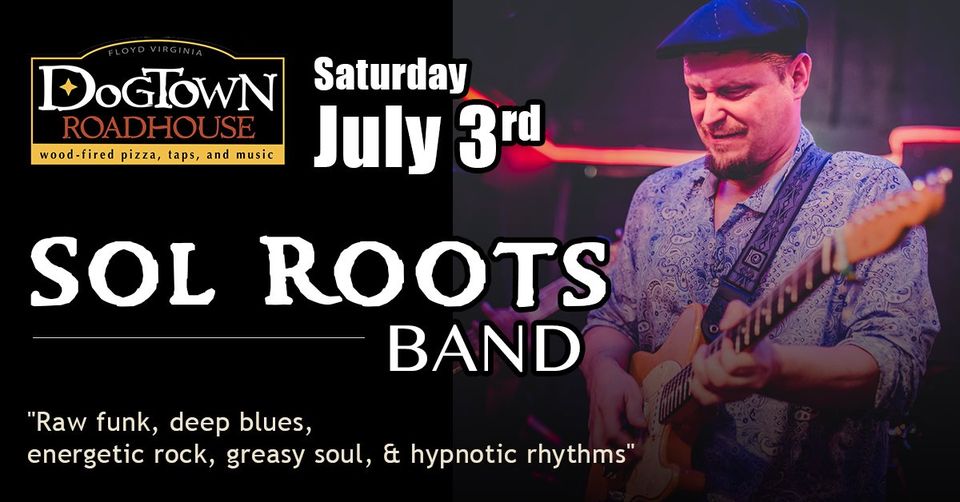 Join us for a mix of raw funk, deep blues, energetic rock, greasy soul, and hypnotic grooves. Sol is a guitarist and vocalist who has toured with many roots, funk, blues and soul legends around the world as a part of Music Maker Revue.
The Sol Roots band has shared the stage with acts such as Jon Cleary, Soulive, Dumpstaphunk, The Wood Brothers, Sonny Landreth, Robert Randolph, Eric Lindell, Roosevelt Collier, Cory Henry & The Funk Apostles, Victor Wainwright, Booker T Jones, Walter “Wolfman” Washington, Shemekia Copeland, Jackie Greene and many more.
Paying homage to the greats, and with a love of Universal Music as the guiding light, Sol steps out on a path with his own unique, powerful voice and a talented band of musicians.
Sol Roots is an official Home Grown Music Network artist and a “Next Generation” Music Maker Relief Foundation artist. Sol Roots was awarded “Best Blues Act/Group” 2019 by The Wammies / The MusicianShip.

“Sol performs a soulful blend of rock and blues, with a natural stage presence” – Jambase
“He’s toured the world with some of the biggest names in funk and blues…He’s the fiery guitarist known as Sol, and his influences span the country, and the globe” – On Tap Magazine