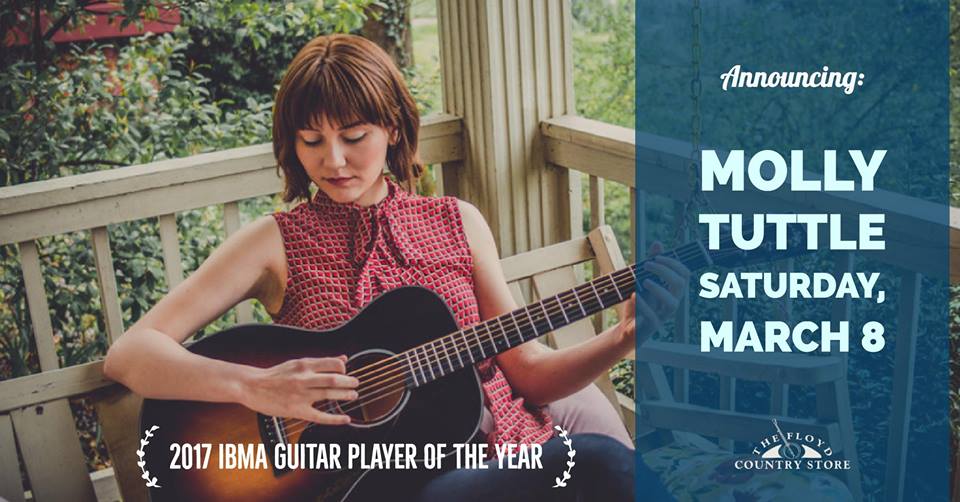 We are pleased to announce that 2017 IBMA Guitar Player of the Year, Molly Tuttle, will be performing a show live at The Floyd Country Store in March.
A virtuoso multi-instrumentalist and award winning songwriter with a distinctive voice, Molly has turned the heads of even the most seasoned industry professionals. She began performing on stage when she was 11, and recorded her first album, The Old Apple Tree, at age 13. Since then, she’s appeared on A Prairie Home Companion and at Hardly Strictly Bluegrass, was featured on the cover of Flatpicking Guitar Magazine, won first place in the prestigious Chris Austin Songwriting Competition at Merlefest, and, this fall, received a Momentum Award from the International Bluegrass Music Association in the instrumentalist category. Her lovely voice, impeccable guitar playing, and sensitive song writing make her a star on the rise. She has already received more than two million YouTube views and is currently gearing up to release her first solo EP.

Tickets are available at:
https://www.floydcountrystore.com/event/molly-tuttle-live-march-8-2018 — with Molly Tuttle in Floyd, Virginia.