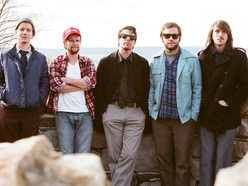 Holy Ghost Tent Revival’s exhilarating live show has uplifted audiences since the band formed in 2007. For the past eight years, they have been honing their unique sound, which NPR describes as that of a “soul-rock horn band that recalls 60s and 70s classic-rock influences such as The Band and The Flying Burrito Brothers, contemporary indie-rock acts like Dr. Dog, and New Orleans brass-band jazz.”

Conceived in Philadelphia under the creative wing of Bill Moriarty (Man Man, The Sheepdogs,) their third full-length studio album, Right State Of Mind, sees the band putting earlier conventions aside in exploration of more soul-rock leanings. The album dances nimbly between genres while touching on themes of alienation, moving on after death, the joy of staying up all night in the city, the interconnected nature and beauty of life, and longing for a home that is no more.

The band has turned what many hail as a deeply personal and evocative group of recordings into a thrilling live performance, the merits of which have led them to share stages with the likes of Dr. Dog, Shovels and Rope, Langhorne Slim & The Law, Pokey LaFarge, Robert Randolph & the Family Band and Lake Street Dive. Holy Ghost Tent Revival’s magnetism will continue to grow and mature in the hearts of listeners across the country, from radio dial to lit pavilion.