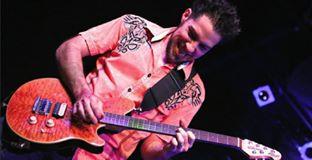 Born and raised in Galveston, Texas, Loomis is the son of musician parents who listened to blues, rock and soul. Music ran in his veins and, with instruments readily available around the house, he picked up drums, piano, guitar and harmonica, honing his multi-instrumental talent in addition to performing regularly as part of his family’s doo-wop group.

“My parents had a fantastic record collection and, when I started writing, I gravitated towards what I’d been listening to all my life. I have a huge reverence for the blues and all it encompasses, but I’ve always been fond of R&B and funky music.”

A protégé of Bo Diddley, Loomis met the icon backstage at the age of 16 at Houston’s famed venue Rockefeller’s. Before the night was over, Loomis was onstage playing guitar with the legend. Diddley quickly became friend, mentor, collaborator and supporter, appearing on two of Loomis’ albums and presenting a cherished red guitar that he still plays.