Floyd Small Town Summer – MUSIC AND MOVIE IN THE PARK 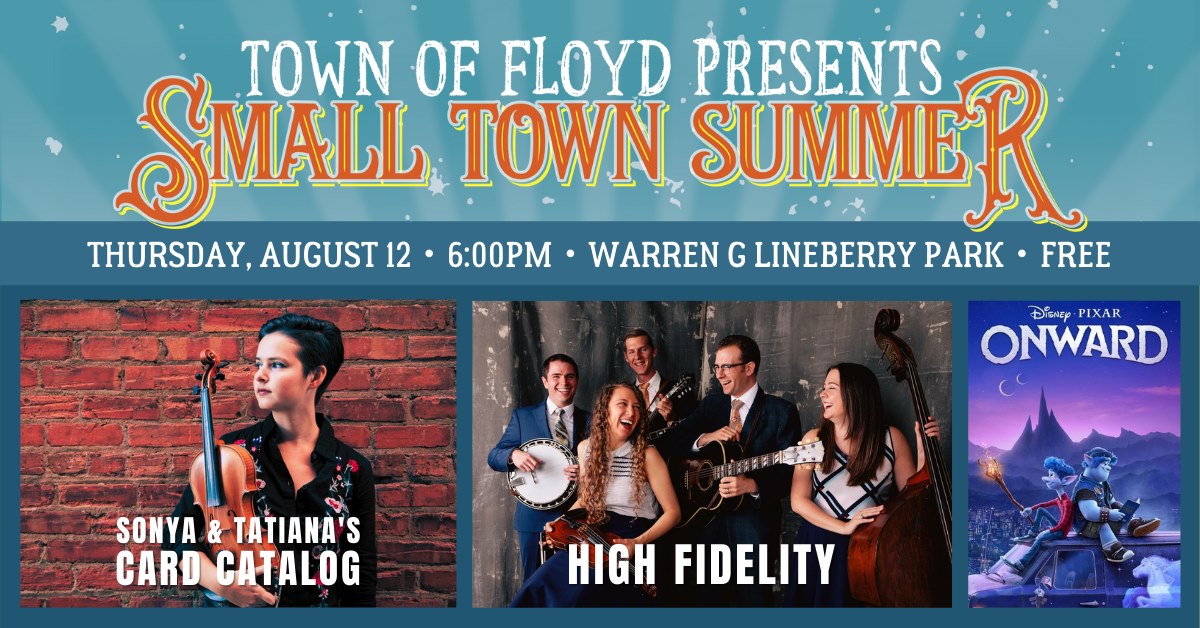 Many folks remember the great bluegrass records from the 1950s and ‘60s. The power and soul of that music has won the hearts of people across the globe. Few bands have come along in recent years that directly draw their influence from that classic era of the music’s history. High Fidelity is a rising group whose love and devotion to that music is unsurpassed. The name alone says it all: HIGH FIDELITY. How many record albums have you seen from the ‘50s and ‘60s that bear those words? Herein lies the heart of what this group of young performers is all about.

Tatiana Hargreaves and Sonya Badigian have put together a great line up of old time and bluegrass musicians to warm up the Small Town Summer audience for High Fidelity. Tatiana Hargreaves has been on the forefront of an up and coming generation of old time, bluegrass and new acoustic musicians. From placing first at the Clifftop Appalachian Fiddle Contest, to her bluegrass fiddling on Laurie Lewis’ GRAMMY-nominated album The Hazel And Alice Sessions, Hargreaves shows a musical fluency that flows between old time and bluegrass worlds with ease. She has toured with musicians such as Dave Rawlings, Gillian Welch, Laurie Lewis, Darol Anger, Bruce Molsky and Jake Blount. She currently tours with banjo extraordinaire Allison de Groot and teaches bluegrass fiddle at the University of North Carolina in Chapel Hill. Sonya Badigian will join on guitar and fiddle as well as a fun line up of old time and bluegrass musicians.

In a suburban fantasy world, two teenage elf brothers, Ian and Barley Lightfoot, go on a journey to discover if there is still a little magic left out there in order to spend one last day with their father, who died when they were too young to remember him. Like any good quest, their journey is filled with magic spells, cryptic maps, impossible obstacles and unimaginable discoveries. When the boys’ fearless mom, Laurel, realizes that her sons are missing, she teams up with the legendary winged-lion-scorpion former warrior — The Manticore — and heads off to find them. Perilous curses aside, this one magical day could mean more than any of them ever dreamed.