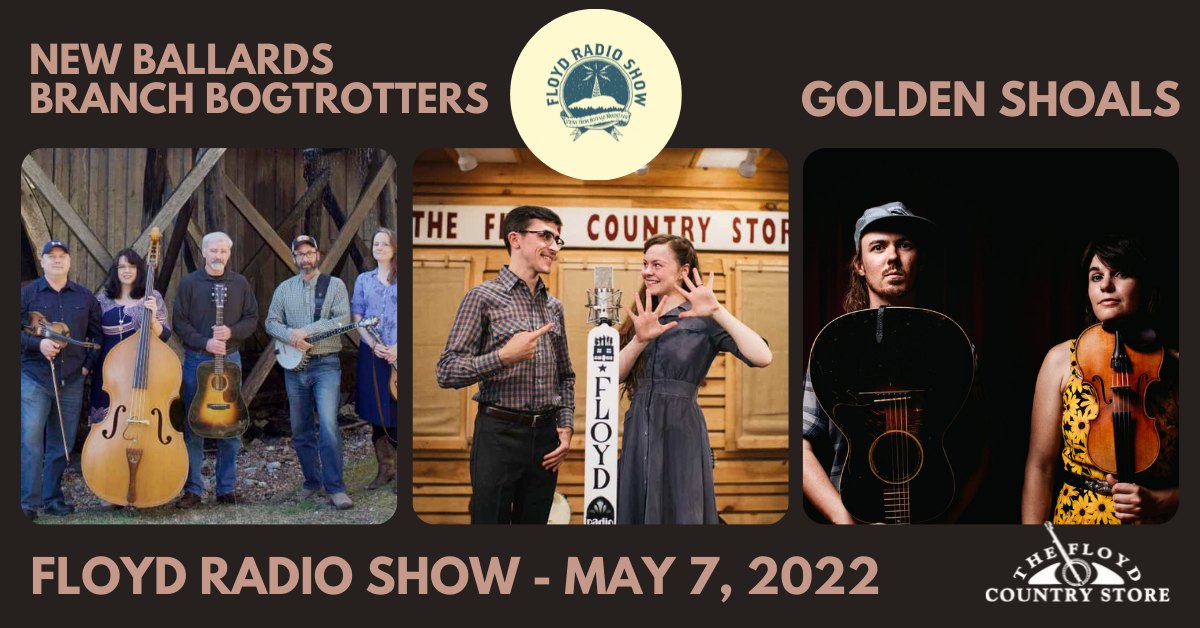 Join us for another episode of The Floyd Radio Show with hosts Andrew Small & Ashlee Watkins. Featuring The New Ballards Branch Bogtrotters and Golden Shoals.
Golden Shoals:
For Amy Alvey and Mark Kilianski, the emergence of a brand new self-titled album also marks a rebirth of sorts for their band, Golden Shoals. Eight years ago, the duo was formed for a very unique performance project, called “The Massachusetts Walking Tour”, on which they hiked 6-12 miles per day with packs and instruments, and played shows each night for two weeks. The two semi-nomadic musicians, who have called Asheville, Boston, and various moving vehicles home for the past eight years, have grown individually and as a unit, yet continue to find musical fulfillment in their collaboration. They now call Nashville, Tennessee their home base.
Initially brought together by a mutual love of American folk music, their sound has expanded to include country, Americana, Indie and Experimental influences, allowing them to move more freely beyond genre boundaries with their songwriting while still emanating a deep understanding of Old-Time and Bluegrass music. Ever inspired by the enduring spirit of traditional Appalachian mountain music, their songwriting comes across as simple, honest, and fresh to the ears. The listener can expect the polished technique of conservatory training, in tandem with the grit, drive, and soul of musicians like Roscoe Holcomb or Ola Belle Reed.
The New Ballards Branch Bogtrotters:
About 25 years ago a group of musicians from the Galax, VA area formed a new band. The New Ballards Branch Bogtrotters took their name, in part from the original Bogtrotters of the 1930’s also because band leader Dennis Hall lives on Ballards Branch. Denis’ home is very close to the home of Uncle Eck Dunford who played fiddle in the original band. The other members of the original Bogtrotters were Uncle Wade Ward, his two brothers, Davy Crockett Ward, and Fields Ward, and Doctor Davis. They won the very first fiddlers Convention in Galax setting a precedence for all that follow in their footsteps.
The New Ballard’s Branch Bogtrotters continue to play in the traditional Appalachian string-band style often playing for square dances around the region. Rounding out the Bogtrotters lineup are: Eddie Bond on fiddle, Dennis Hall on guitar, Josh Ellis on clawhammer banjo, Bonnie Bond on bass and Caroline Beverly on mandolin. The New Ballards Branch Bogtrotters remain a driving force in carrying the traditional music of the Virginia/Carolina Blue Ridge into the new millenium.
About our hosts:
Andrew Small:
Born and raised in eastern North Carolina, Andrew Small is a multi-instrumentalist and singer who has performed with artists ranging from Sierra Hull and Mandolin Orange to the North Carolina Symphony. He now resides in Floyd, VA where he serves as Coordinator of the Handmade Music School and also tours with the group Bill and the Belles. Singing and performing on mandolin and fiddle with his wife Ashlee Watkins as the New Macedon Rangers, Andrew is a regular performer for Friday Night Jamborees at the Floyd Country Store. Andrew has won numerous blue ribbons from fiddlers’ conventions around the Southeast for his old-time fiddling and in 2015 was named the Bluegrass Mandolin Champion of Australia. He holds a master’s degree in music performance from Yale University.
Ashlee Watkins is a singer and multi-instrumentalist originally from Newcastle, NSW. Described by fiddler Bob Herring as having “it”, her powerfully unadorned vocals possess a timeless quality that evokes an uncommon emotional poignance. She has been awarded a number of blue ribbons from fiddlers’ conventions around the southeast for her folk singing and old-time banjo playing, and her band the New Macedon Rangers has been awarded blue ribbons in both old-time and bluegrass band categories.