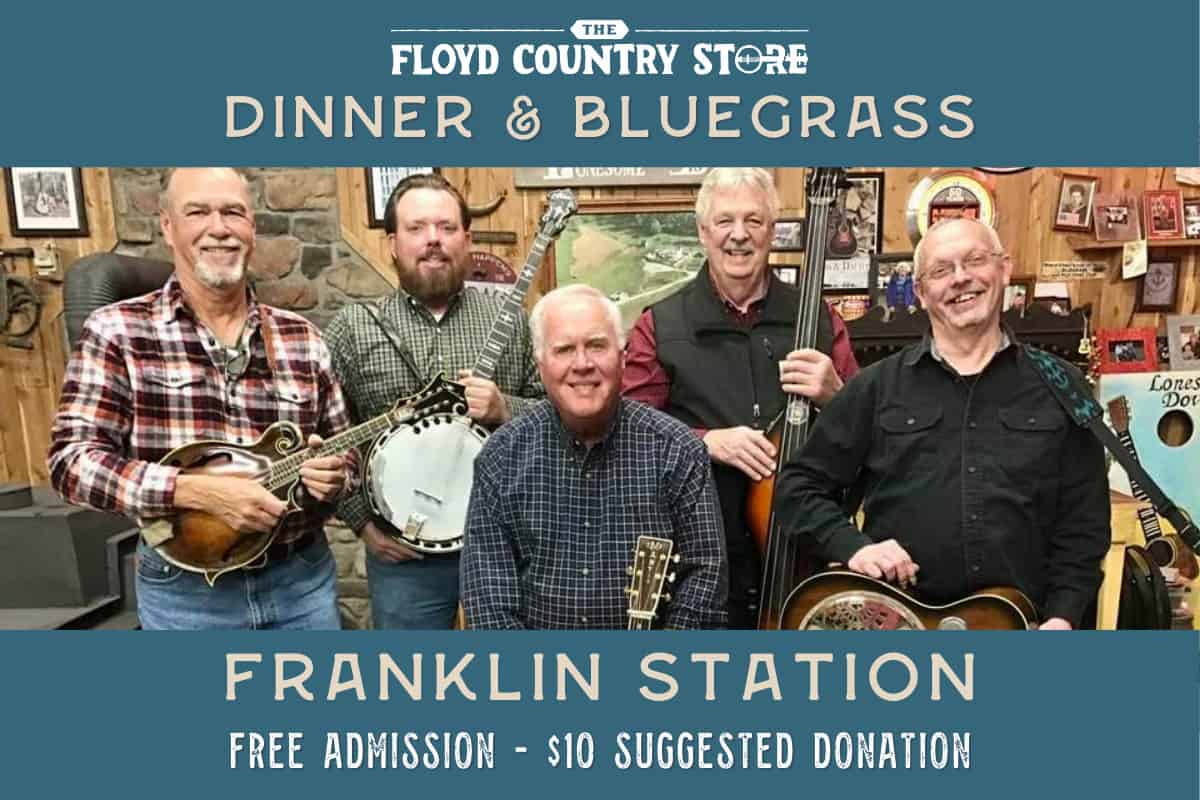 Join us at the Floyd Country Store on Saturday, January 7, 2023 from 6:00 – 8:00 pm for dinner and bluegrass music with Franklin Station Bluegrass Band. Admission is free with a suggested donation of $10.

Franklins Station is a five piece band originating from South Central and Southwest Virginia. They have played music most all their lives but not in this formation until a little over 3 years go. They are all seasoned veterans that have combined a wealth of knowledge and talent in the music that they play. With their excellent instrumentation and smooth vocals they perform a mixture of standard bluegrass, contemporary bluegrass, gospel and country music that will soothe any bluegrass soul. Band members include:

Steve Worley : (lead vocals and guitar) Steve has played guitar since the age of 12 and has one of the strongest voices in bluegrass. Some of his influences are Flatt and Scruggs, Stanley Brothers, Osborne Brothers and Merle Haggard.

Ralph Clay : (vocals and bass) Ralph was influenced to play bass by his Dad. He played in his Dad’s band until he was drafted into the Army. Ralph played bass with the late Jim Eanes in the 80’s. Then continued on the road professionally with a band for 14 years.

Josh Layne : (banjo) Josh has played banjo and guitar since a young teenager. He was influenced by his Grandfather Calvin Layne and Sonny Guthrie. That influence led him into the sounds of Flatt and Scruggs, Jimmy Martin, The Osborne Brothers and J D Crowe and the bands of that era.

Ernie Power : (dobro) Ernie has played dobro since the age of 12 and was strongly influenced by his Dad and Uncles, Other influences are Josh Graves, Mike Auldridge, Jerry Douglas, Flatt and Scruggs, Bluegrass Album Band, Blue HIghway and many more.

Jackie Cooper : (vocals and mandolin) Jackie started playing guitar at 6 and mandolin and banjo by the age of 10. His Dad was an accomplished fiddle player who taught him to play at an early age. He grew up listing to the albums of The Stanley Brothers, Chubby Wise, Flatt and Scruggs, The Osborne Brothers, Bill Monroe with Kenny Baker playing fiddle and Larry Sparks. Other influences were Ricky Skaggs, Tony Rice, Sam Bush, Wayne Benson, Doyle Lawson and JD Crowe.